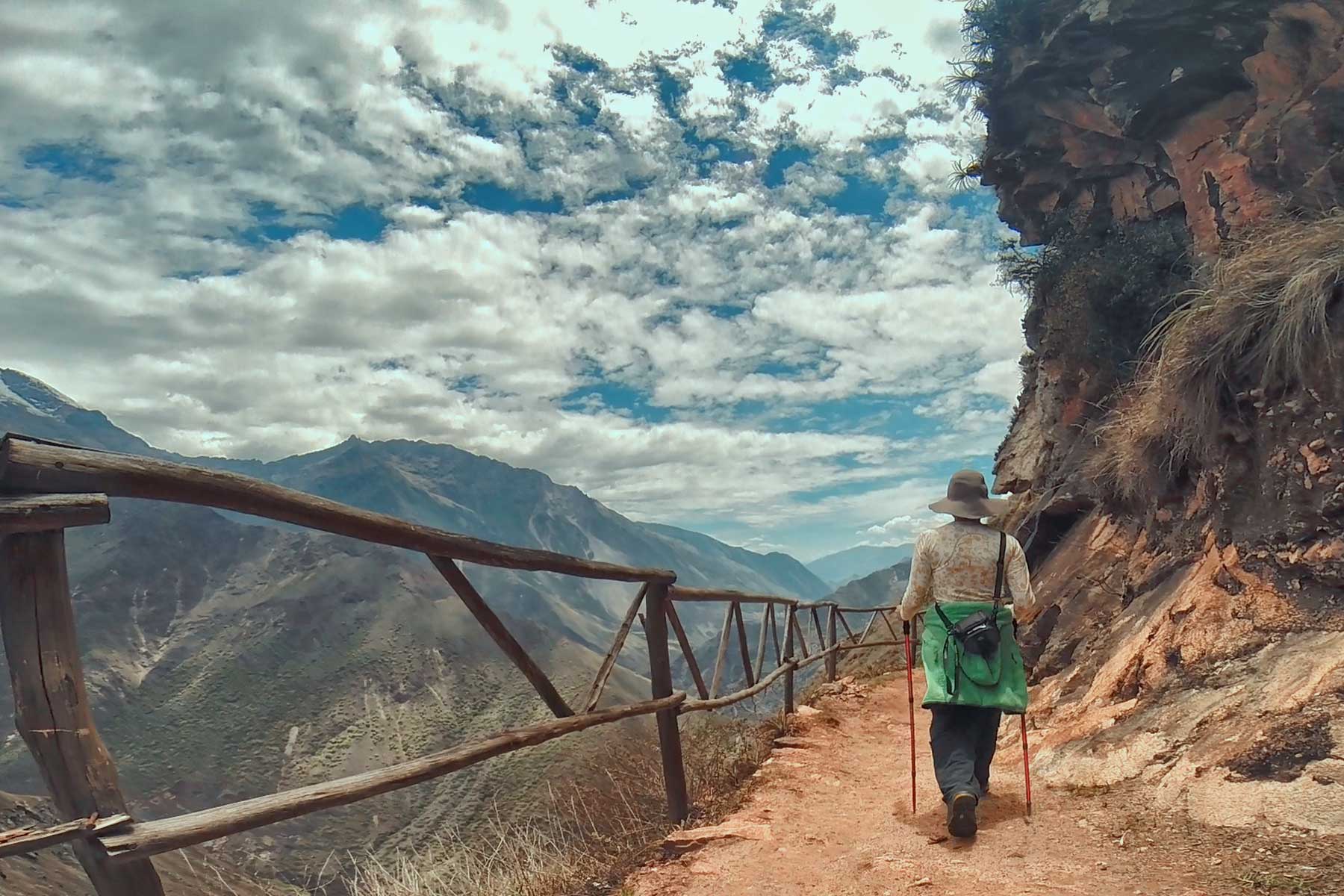 Are you looking to get away from the noise and lights of the city? Do you want to test your physique and your spirit? We suggest you meet the sister of Machu Picchu, Choquequirao.  Have you heard of these magnificent ruins?

The first thing you need to know is that Choquequirao is an archaeological park located on the top of a fertile mountain. It is in the regions of Cusco and Apurímac. It is a hidden gem in the Salkantay mountain range, on the valley of the Apurímac river, in the district of Santa Teresa. This important archaeological site is almost 180 kilometers from Cusco, but, it is not the easiest arrival.  It is one of the hardest trekking spots in the area.

The area surrounding Choquequirao is characterized by its rich biodiversity. Thousands of species of flora and fauna have developed here despite the temperature variations ranging from intense heat and sun throughout the day to heavy frosts at night. The fauna of the place is composed mainly of condors, tarucas, vizcachas, foxes, zorrinos, pumas, hummingbirds, bears and the gallito de los rocas, national bird of Peru. The flora, giant ferns, ichu and a great variety of orchids stand out.

The sister of Machu Picchu

Choquequirao was an Inca citadel of enormous importance for the empire. It was one of the last places where the Incas took refuge to resist the invasion of Spanish settlers, around 1535. But, in its time of greatest splendor, it was a huge cultural and religious center. It is strategically located between Cusco, Pisac and the jungle. It was used as a control center. Because of its magnificent constructions, its carvings and its historical importance, Choquequirao is known as “the sister of Machu Picchu”.

The name Choquequirao comes from Quechua chuqi: gold, and from K’iraw: cradle, so Choquequirao is named: “cradle of gold”. The ruins of this ancient Inca city are located between the foothills of the snowy Salkantay, and under the jurisdiction of the district of Santa Teresa, in the province of La Convención.

Among the most outstanding archaeological monuments of Choquequirao are its buildings and terraces distributed in different levels, from the lowest level (Sunch’u Pata) to the highest truncated top, which was leveled and surrounded with stones to form a platform with an area of ​​150 square meters.

Choquequirao (sometimes also as Choqequirau or Choqekiraw) is justly known as the “sacred sister” of Machu Picchu because of the similarities that exist in the structure and architecture of both, recently, being partially excavated, it has aroused the Peruvian government’s interest in recovering even more of the complex. To turn it into a more accessible alternative for tourists interested in knowing more about the Inca culture. 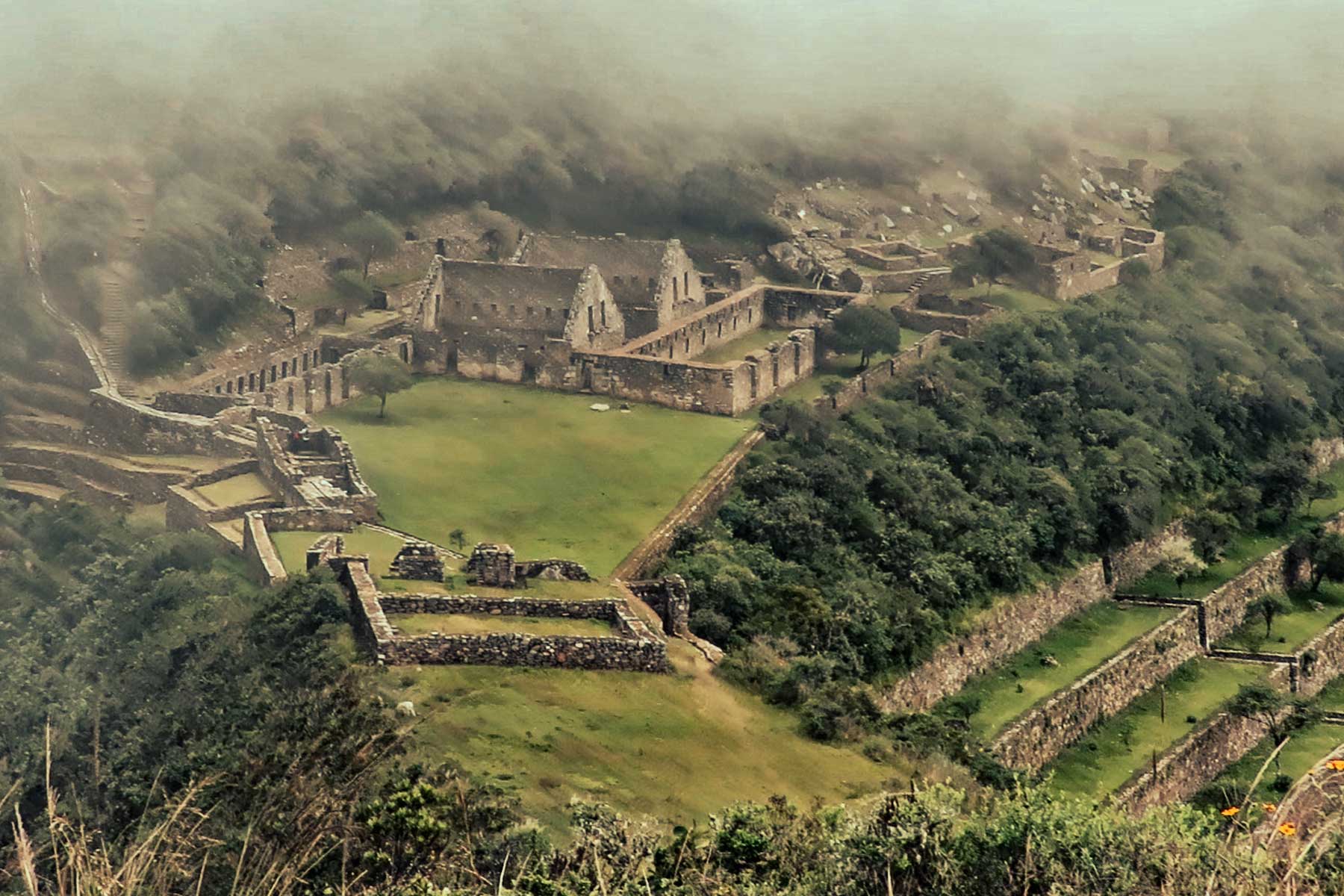 What is known about this ancient city?

The complex of Choquequirao is composed of nine sectors, among which are the religious-political center and the system of fountains and channels with aquaducts. It is estimated that only 30% of Choquequirao is known and there is much of the city hidden among the thick jungle.

The Inca terraces that make up the great constructions of Choquequirao are easy to see from an aerial view or from certain distances. There is also a temple, some administrative buildings and rooms that were located around the central square.

The rooms used by the rest of the population is forming a small village on the outskirts of the ruins. It was such an advanced building that there were many channels for irrigation and also for the supply of drinking water. Despite the weather and the inclement weather, most of the buildings of the “sacred sister” of Machu Picchu are well preserved, and its restoration will last, according to some experts who are in charge,  several more years.

From the Andean perspective, its location is undoubtedly strategic, which allowed this unique settlement to encompass and have a mastery over what could be considered one of the most extraordinary altitudinal routes in the country.

Choquequirao is shown as a large open book, with the mighty Apurimac River at its feet and a large mountain range that rushes towards the eastern slopes covered by an immense tropical vegetation; being another sample of the Andean pretension to dominate the world from above.

How to get to Choquequirao?

The round trip can be made in 4 or 5 days. An important access route is to start from Cusco taking the road to Abancay and at kilometer 154 choose the detour that leads to the town of Cachora. Alternatively you can start from Abancay and travel 42 kilometers on the road to Cusco, to divert towards Cachora. From this town, an uphill walk of about 27 kilometers must be made, the route of which lasts two days. It is also possible to access other nearby towns, however the route may be more rugged.

It is not a simple trip that must be done to reach Choquequirao, but it is not impossible either. That’s why we propose that you challenge your body and spirit in this adventure. Your journey to reach Choquequirao can last from 3 to 5 days. It all depends on how you feel along the way and how much time you have to enjoy this historic wonder. We propose our tour Choquequirao in 4 days, which will be an opportunity to discover this archaeological park.

Your adventure begins in Cusco from where you will travel to the town of Cachora. There the walk begins. First you will have a stretch of up to 6 hours (first downhill and then uphill) where there are incredible views of the Padreyoc mountain. There is also a view of the deep canyon that is crossed by the Apurímac River, which means “river that speaks”. It is advisable to spend the night inside the Chuquisca Canyon.

It is very important to wear light clothing but also some shelter since the temperatures vary considerably from the cold of the mountain to the heat of the valley. On the second day you can go up to the town of Marampata. There you will have one of the best panoramic views of Choquequirao. The walk continues to that destination where you will spend all day. At this moment it will be more than 3,000 meters above sea level. It is ideal to spend the night and wake up very early to enjoy a sunrise with an unforgettable view of Choquequirao.

The hike to Machu Picchu

On your last day before returning you can go down to the San Ignacio Canyon (1,500 meters above sea level) and spend the night in the beautiful Jardines del Carmen. Our advice: do not forget sunscreen and repellent because it will be in warm jungle areas and mosquitoes abound.

On the fourth day you can undertake the return to Cusco. You will return with memories and a camera full of unforgettable landscapes, with tired legs, but with a revitalized spirit from this incredible expedition.

If you have not experienced Machu Picchu before you see Choquequirao, we will warn you that there is a route that connects this archaeological park with the mythical Inca city. It is a stretch of almost 44 kilometers, only for the brave and adventurous since it can take between 7 to 9 days to connect these attractions.

Choquequirao was a huge granary and pantry of the Incas. This is characterized by the cultivation of coffee, cocoa, coca and fruit trees. We recommend you try the fruits of the local gardens. Choquequirao impresses with its majestic Inca, architecture of terraces, squares, enclosures, large walls with niches, carvings and other constructions. If you come to Cusco, do not miss the chance to see this majestic city.