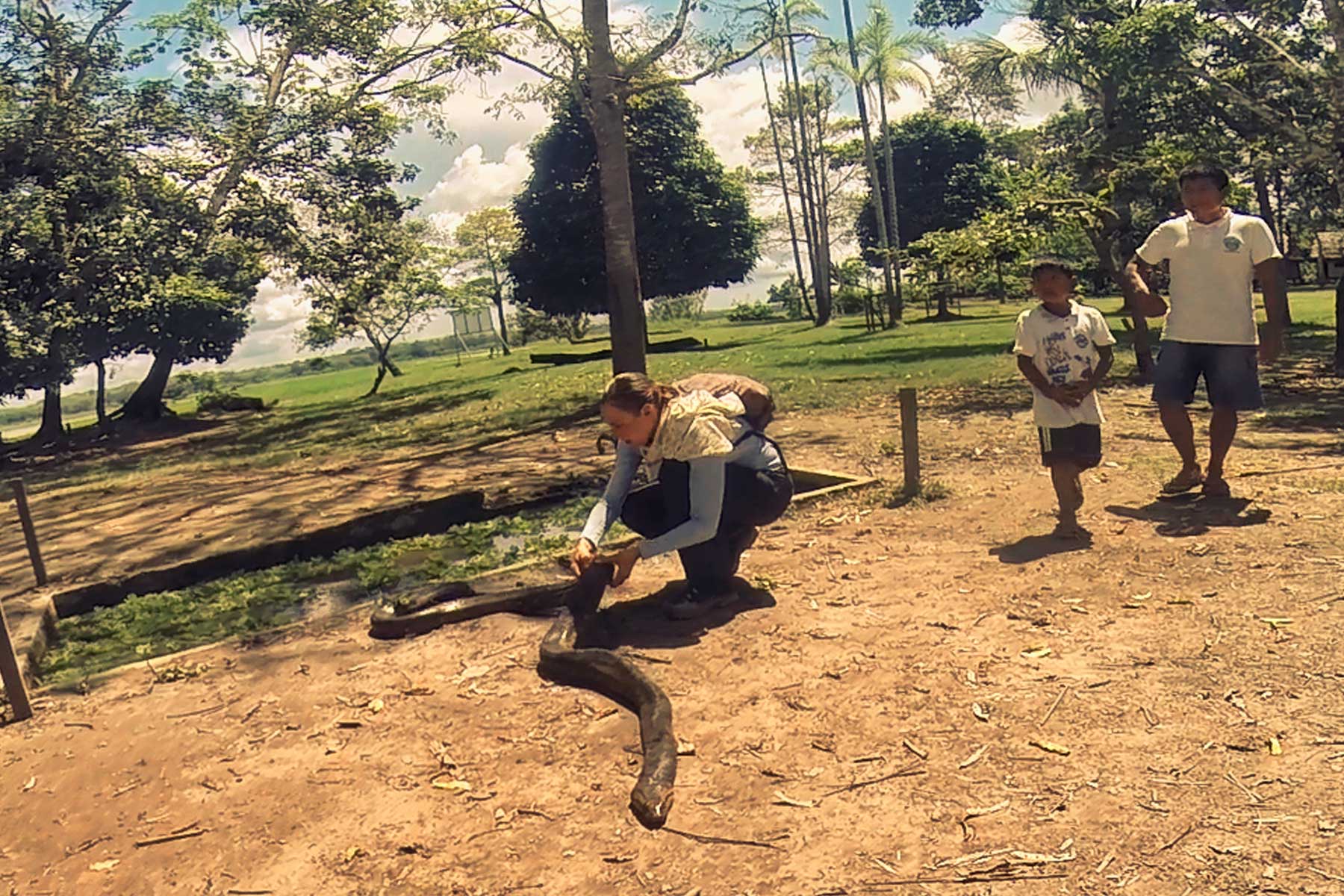 One of the things we quickly learn when traveling is that you can’t know everything that a country has to offer. You are sitting in a city square looking at the tourists map and understand that choosing a route is relegating another. You sigh and try not to be consumed by that mixed feeling of anxiety and anguish, for not being able to tackle all of the attractions. Suddenly we realize that the countries are much bigger than we imagined them when we had studied Geography in high school. Not only that, but there are endless stories, places, people and cultures that we never heard about, either. We choose Peru. We read a lot of articles about Machu Picchu, Cusco, Lima or Lake Titicaca. But, while surfing the Internet we found a destination that caught our attention: the Peruvian high jungle.

But what is the high jungle? Where is it? What is there to see, to eat, or to do? What towns or cities could we discover? One by one names start to pique interest: Tarapoto, La Merced, Villa Rica, Pozuzo, Tingo Maria, Moyobamba, Chachapoyas. We imagine a route along paths surrounded by thick jungle, which cross between coffee fields and exotic fruit plantations. Finally we decided to adventure into this region of Peru called the high jungle.

It is also true that what is planned often collides with reality,  and the plan is always changing. In this post we will tell you about our travels through the southern zone of the Peruvian high jungle. We will discuss La Merced, Villa Rica and Pozuzo. But if you want to go north, we invite you to read the article: Attractions of the northern route: Gocta, Kuélap and the Moche Culture.

Characteristics of the high Peruvian jungle

The trip starts in Lima, where we got off the bus. This is the route we took and we leave it as an option ( there are many more, of course). Our objective was to visit the most important places in the south of the Peruvian high forest.

Lima is a coastal city, which has a low altitude,  but only here were we free of the effects of “soroche” or altitude sickness. The region we traveled to has areas that reach 2,000 meters above sea level. That’s why we bought coca tea (or the popular “Sorojchi Pills” are an alternative). We ascended slowly to acclimatize. Although we felt fatigue anyway, we alleviated the important problems such as headaches with coca.

We were very hot as the temperature in the day exceeded 30 degrees  celsius (86º fahrenheit) and we moved through areas of intense humidity. But in some places the nights were as cold as 5 degrees celsius (41º fahrenheit). Luckily we had packed a vareity of clothes in the backpack, which allowed us to walk lightly in the day (and get a tan) and  still stay warm at night. If we talk about heat, we do not need to remind you to wear sunscreen, sunglasses and a hat. It also does not hurt  to bring a bit of cocoa butter because our lips dried up on this trip.

Mosquitoes are part of the landscape so we got used to their company. They were with us all of the time. Here are two details to remember when travelling to the jungle: the first is that you carry a repellent in your backpack; The second and most important, you have to have the yellow fever vaccine. We arrived in Peru already vaccinated since it is likely that many places can not be entered without this card. It’s almost as valuable as your passport.

We wore comfortable shoes because we walked a lot; drank lots of water (and rested in beautiful crystalline rivers); brought a waterproof jacket for the mornings of fog and humidity; and swim gear as well.

La Merced was our first destination inside the high jungle. From Lima a collective bus took us to this city on a trip that lasted almost 8 hours on a paved road of just over 300 kilometers. La Merced has around 20 thousand inhabitants and the average temperature is 23º celsius (74º fahrenheit) almost all year round. The city is on the western bank of the Chanchamayo River, which later becomes the Perené River, a tributary of the Amazon River. It is located almost 800 meters above sea level northeast of Lima. The area was populated by the indigenous Piro, Amuesha and mostly Asháninca peoples.

The landscape changed drastically during our trip. We went from the arid Peruvian coast to the thick jungle and it’s pleasant warmth. In addition to going through the central square and the church (which are very beautiful) we went to Cerro La Cruz viewpoint. We also visited the Gallito de las Rocas Zoo. In the surroundings of the city there are waterfalls and there is the river where we swam. We chose to stay a couple of nights here since we had such a great time.

The city of cafes: Villa Rica

After enjoying a couple of nights in La Merced, we went up the Chanchamayo river to Villa Rica.  When the river goes towards the sea, we climbed the mountain. We arrived at an area known as “the land of coffee”.

We are already at an altitude of 1,470 meters (4,822 ft.) above sea level. The temperature stayed around 21º  celsius (70º fahrenheit) but the humidity (89% average) is intense so the heat felt a bit overwhelming. But we prevailed. The Peruvian high forest, is between the Andes Mountain Range, the Eastern Mountain Range and the Amazonian plain. The high forest extends from 750 masl to 2,068 masl. One of the characteristics of this region is its geomorphological variety marked by deep canyons, rough buttresses, innumerable gorges and extensive valleys where a vast biological diversity develops. We looked with admiration at trees over 20 meters high and let ourselves be enveloped by the morning mist. What we liked the most were the calm rivers and the small boats that cross through them.

In Villa Rica we did agro-tourism and we learned how coffee is produced. This city is obsessed with their coffee, even in the central square we came across a giant coffee pot and a monument that represents coffee (it is a native Yánesha carrying a coffee bean). 30 minutes from the city is the Oconal Lake that we visited. We also trekked to the El León Waterfall, only 5 kilometers away. There are also hostels and restaurants so we were able to travel comfortably. We stayed three days and two nights in this region. Immediately we began to imagine our next destination: Pozuzo.

History of Pozuzo and its Austrian-German colonies

The first thing we learned about Pozuzo is that it is a town where the official languages ​​are Spanish and German. Although it was founded in the mid-nineteenth century by Austrian and German settlers, in the area where Pozuzo now exists, aboriginal communities live still. The amajes and the amueshas or yaneshas stood out. There were also vestiges of the Inca Empire, which  had came to conquer this region.

In this area the climate is divided into summer (from May to October) and winter (from November to April). The first season is drier and the second is characterized by constant rainfall. The temperature is pleasant and there are almost no mosquitoes so our stay was much more pleasant than other, buggier areas. We spent several days in this city that maintains its European customs and architecture. We bought some crafts that link ancient traditions with modernity and we learned European dances like the polka! It was very fun!

Why did we visit Pozuzo as the last destination on this trip? For its access point. There is a section that joins Oxapampa with Pozuzo, of more than 75 kilometers, which is dirt. In the rainy season, access is almost impossible since the area is totally isolated. We did not  have to worry much because there are several groups that go from Pozuzo to Lima. It cost around 150 soles. There are also cars that can take you and bring you for less money, but we opted for the collective bus.

If you are in Peru and you want to venture to tourist destinations along your trip, we hope you choose the south of the high jungle and enjoy it as much as we did. This trip took us 10 days but it can be done in less time. We have some unforgettable memories of this area of ​​Peru.