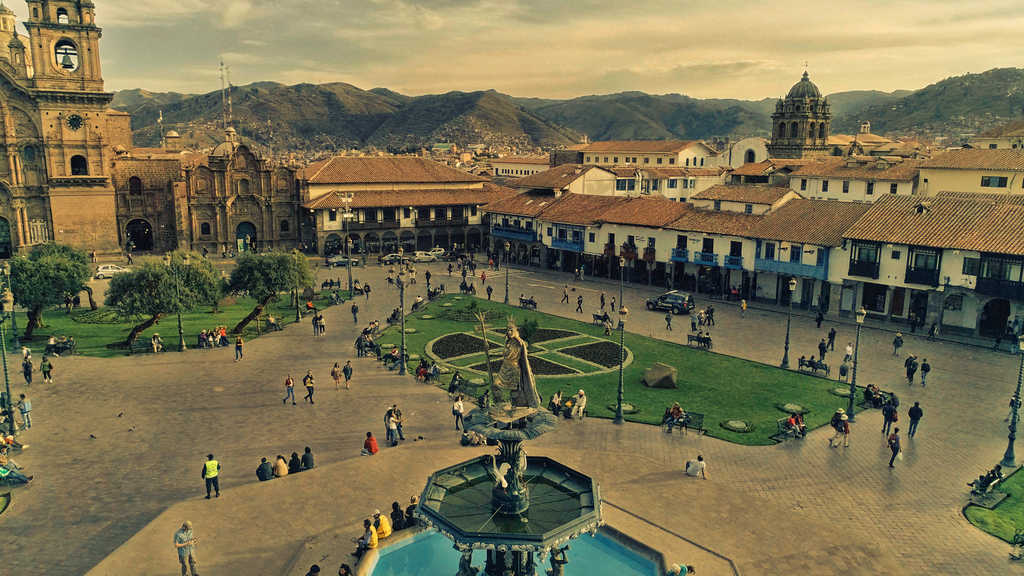 If you come to Cusco and only have a few days to see the city and the region we can tell you how to see all that is great about the ancient Inca Capital in one afternoon.

Cusco was once considered the center of the world as it was in the heart of the Inca Empire. The city is very old, nowadays you can see the mixture of the Inca culture with the colonial influence in its architecture, especially in the historic center. Between giant stones and tile roofs you can see the confluence of the Spanish with the aborigines.

What is the significance of Qorikancha or Temple of the Sun?

The temple of the Sun is the first attraction people think of in Cusco. Its huge construction takes up several blocks around the edge of Plaza de Armas.

Este es el primer atractivo turístico que se visita en Cusco. Es una construcción gigantesca que se ubica a pocas cuadras de la plaza de Armas. In olden times it was known as “the gold enclosure”. It was the sacred site where the Inca god was worshiped: the Inti (Sun). For this reason, those who wished to enter could only do so barefoot, fasting and with a huge burden on their shoulders as a sign of humility. These were the indications offered by the Inca high priest Willaq Umu.

Among the valuable objects that can be found in Qorikancha is the frontis, which was a majestic wall from a fine quarry. To decorate it, only a thin sheet of pure gold three meters high was used, with a fine and delicately cut straw roof.

In one of the blocks of the second course (horizontal series of stones) there are three holes that could be used to drain the rainwater from the interior patio, or as an outlet for the chicha(corn beer) that was given as an offering. Apparently, if you hit inside the holes you can hear the musical notes “re”, “la” and “sol”, according to an experiment made by Augusto León Barandiarán 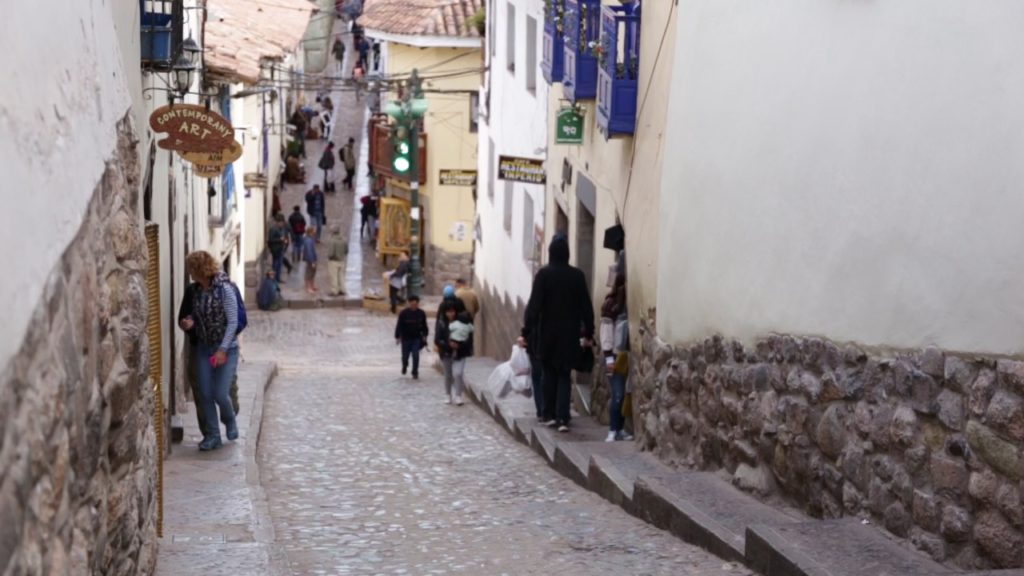 There are no certainties about why this impressive building was created or on what date the work began. But according to anthropological research, it could date from a period before the Incas became an empire, when the Ayamarcas were the tribe in control.

When the ninth Inca, Pachacuteq, took over in 1438, the building underwent extensive renovations, as did the entire city. It even began to be called Qorikancha (its current name) only when the Incas seized the facilities.

There is also no consensus regarding the date on which it was finished remodeling. Some historians believe that it was during the government of Pachacuteq himself and others that it ended in the reign of Túpac Yupanqui.

What is known is that, according to the Inca conception, Qorikancha was the religious, geographic and political center of Cusco. The chronicles of the time portray how important this temple was and how ostentatious it was since not only the front was gold, but also the floors and walls, including the garden, which had animals and life-size plants, also of gold.

The temple possessed many divinities inside, in different alcoves, and as principal, the Sun God (Inti), represented by a male figure called Punchaocanchiq, in real size made of gold, and in others as the goddess Luna, by a female figure made in silver. Also in the central courtyard were vicuñas, birds, trees, plants such as corn, etc. all in real size made of gold and silver.

But not everything was prosperous in Qorikancha. In 1533, the temple was looted almost completely, stripped of the precious metals that decorated it. Before the invasion, the Dominicans built the temple of Santo Domingo in 1530 on top of the foundations of the Qorikancha.

From the original temple there are few foundations in perfect condition since it has suffered from three earthquakes (1650, 1749 and 1950). Six years after the last earthquake, in 1956, the reconstruction of the Santo Domingo temple began (under the supervision of UNESCO) with some modifications, but seeking to give more importance to the Inca walls, thus forming a cover in most of the parts of the walls of Qorikancha.

These four tourist attractions are within walking distance of each other and the Temple of the Sun. San Pedro is one of the most important markets of Cusco. In it you can buy all kinds of products: from fruits, vegetables and meats, to souvenirs, t-shirts and alpaca clothes. It also has a large dining room for lunch at affordable prices. In San Pedro you can find absolutely everything.

After a short walk through this sector, the tour continues in the Plaza de Armas and the dominating building at its head: the Cathedral. This sector of the city is very beautiful and is always full of tourists. It is a meeting place and to take the best photos of the historic center.

Surrounding the square, and also throughout the historic center, there are many bars and cafes with balconies on the street that offer a beautiful dining and panoramic experience. It should be noted however they will give a very high price for less than authentic foods. In the surroundings there are also many shops, geared towards tourists and also with high prices. Most of the streets are cobbled, almost all the buildings have small carved wooden balconies and the night lighting is with lanterns scattered around the corners of the city. These details make Cusco a magical and beautiful city. Though marred in this beautiful square somewhat by the presences of a a McDonalds, Starbucks and KFC

And even more beautiful is in the sector of San Blas. A few blocks from the heart of downtown is this neighborhood characterized by its bohemian bars and the number of hotels and accommodations for travelers. In San Blas culture is evident in every corner. Ar bleeds onto the street or in the pubs: there are musicians, painters and writers, and travelers who make their living practicing some artistic activity.

There is also a very large handicraft market and numerous restaurants of all kinds and for all budgets in this sector. San Blas is a place to walk day and night as it is very safe too.

Before going up to the highest area of ​​Cusco to visit the Inca ruins, you must visit the famous stone of the 12 angles. It is located on Hatun Rumiyoc Street, very close to the Cathedral and San Blas.

This stone is part of one of the walls of the current archiepiscopal building in Cusco. The magnificent rock fits right in with other rocks that surround it and that make up a mixture between colonial and Inca architecture.

You can not touch this stone but you can observe it and take photographs.

The Ruins of Cusco

There are 4 archaeological sites and ruins that can be visited in the surroundings of Cusco with the city tour: they are Sacsayhuamán, Q’enqo, Puca Pucara and Tambomachay.

Its name in Quechua means “hawk satisfied” and is located in the highest area of ​​Cusco. It was an Inca ceremonial center that was built during the government of Pachacuteq, in the 15th century; and finished by Huayna Cápac in the 16th century. The monumental work of megalithic walls is considered one of the important ones built during the height of the Inca Empire. From inside you can have striking views of the surroundings, including the city of Cusco.

Sacsayhuamán occupies more than 3 thousand hectares and has a striking design. It is said that the ninth Inca, Pachacuteq, was inspired to design of the city of Cusco as a puma, the sacred animal or guardian of earthly things and that the strength of Sacsayhuamán would be the head of the animal.

Although the way it was built is typical of Inca architecture, the megalithic stones brought from the quarries are much larger. The rocks reach a height of 9 meters and it is believed that 20 thousand worked to build this place. It is not known with certainty what purpose Sacsayhuaman was built for. While some historians assume that it was to train warriors, others believe it was for religious purposes. The concrete thing is that it served as a strong defense during the Spanish invasion.

Only 6 kilometers from Cusco is this impressive archaeological site. It was a shrine during the time of the Incas and is located on what is now known as the Socorro hill, very close to Sacsayhuamán. It has an extension of more than 3,500 square meters.

A Quechua word meaning “Red Fort”. This military construction is located close to Cusco. Puca Pucara is a fortress built from large walls, terraces and stairways and was part Cusco’s defenses in particular and the Inca Empire in general.

The name “Red Fortress” refers to the red color that the rocks acquire during the twilight. Puca Pucara is another example of military architecture that also functioned as an administrative center, with platforms, terraces, stairways and passages.

The last of the archaeological sites visited during the city tour of Cusco is Tambomachay or Tampumachay (in Quechua which means ‘place of rest’). This site was designed to replenish water and also so that the Inca army could rest.

Tambomachay is only 15 minutes from Cusco (7 kilometers) in the Andes mountain range and at an altitude of 3,700 meters above sea level. The building has a series of aqueducts, canals and several waterfalls that run along the rocks. A striking fact is that the Incas built a main waterfall and two identical secondary ones. So much so that if a bottle of water were placed in each secondary waterfall they would be filled at the same time. You can test it even today.

Here was also a kind of royal garden whose irrigation came from a complicated system of channels specially made for such the purpose. It also worked as a checkpoint, especially for those arriving from Antisuyo.

In a few hours you can tour these impressive cultural and historical attractions of Cusco with the city tour. As time is time and you have to make the most of it, this is our recommendation to enjoy an unforgettable stay in this city.