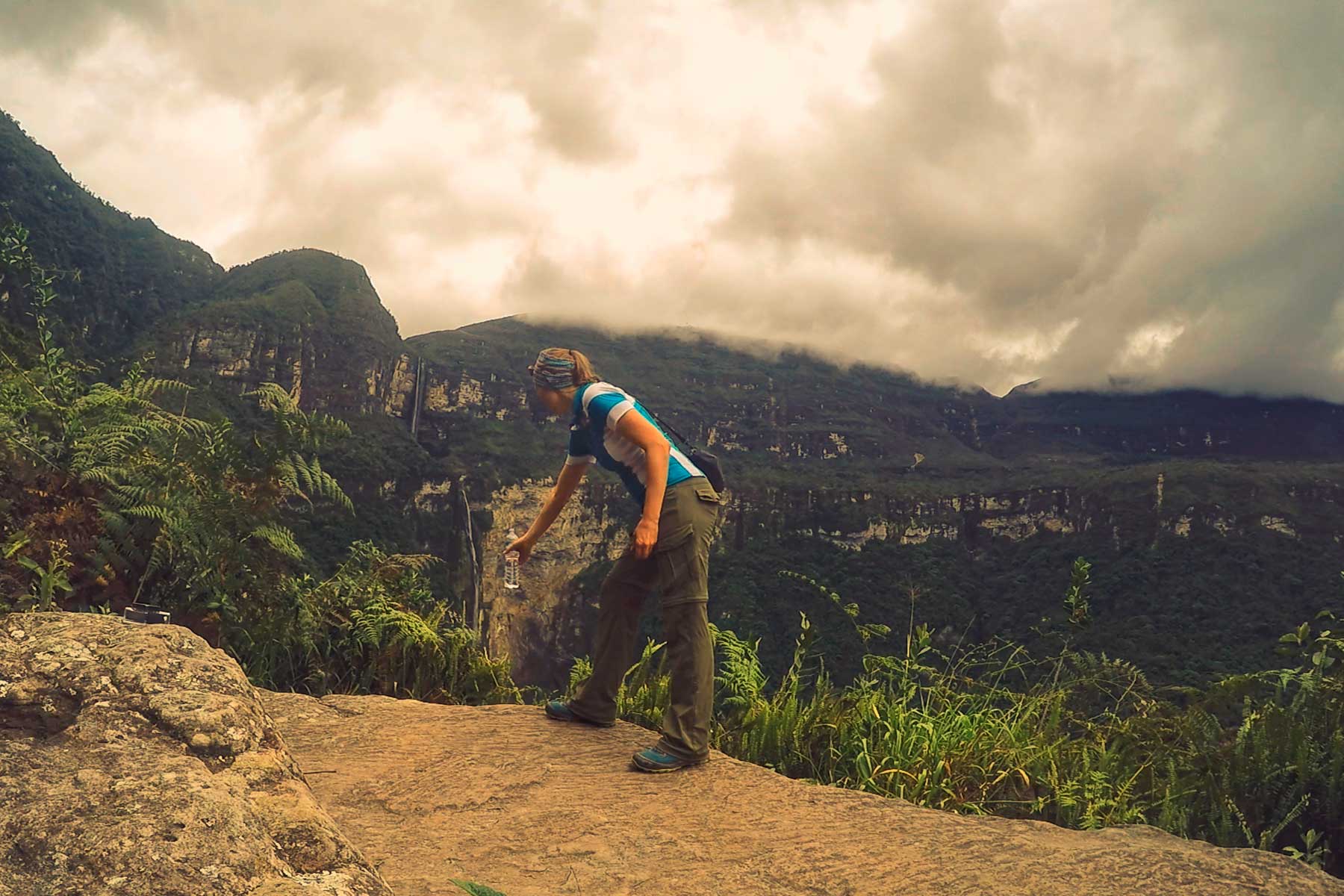 Northern Peru is home to natrural wonders, exotic foods, and ancient cultures. In our trip exploring Gocta,  Kuélap and the Moche Culture we discovered new ways to appreciate the natural world and learned from civilizations with culture and customs dating back far before the Inca.

The adventure to the high forest was a trip to some of the most breathtaking locales in northern Peru. We began in Lima on our way to Tarapoto. From there our plan was to go to the forest towns near Gocta and Kuelap. We would cross the mountain and head for Cajamarka, climbing up all the way to Chiclayo and following the cost back to Lima visiting points of interest along the way inclluding Trujillo and Huanchaco, the home of Moche Culture.

The road to the Peruvain Jungle

In order to get to the the jungle we took a flight from Lima to Tarapoto. The city is known as the city of Palms. It is not at a high elevation but it sits at the foot of the mountain and the average annual temperature is a subtropical 25C.

Tarapoto offers plenty to do. A favorite of ours was the Urkus Animal Reserve, where the species live free and can roam the reserve without the kind of sad restrictions you find in zoos. The same day we went to Isla Bonita (beautiful island), an idyllic space outside the city where we swam in a natural pool and recovered from travel.

The tropical climate in the area means the waterfalls are always flowing and the rapids are always rushing. We went to Carpishuyacu, only 45 minuts walking outside the city on a beautiful trail. Before long it was like we were in a place untouched by man.

It was also in tarapoto we had our first experiences with the local cuisine. The flavoring and ingredients were exotic even when familiar. Shrimps, and animals from the mountains, fish wrapped in bijao leaves and vegetables unique to the region. One dish that stood out was Ninajuane, a tamale of beaten eggs and chicken wrapped in a banana leaf and cooked on a grill. 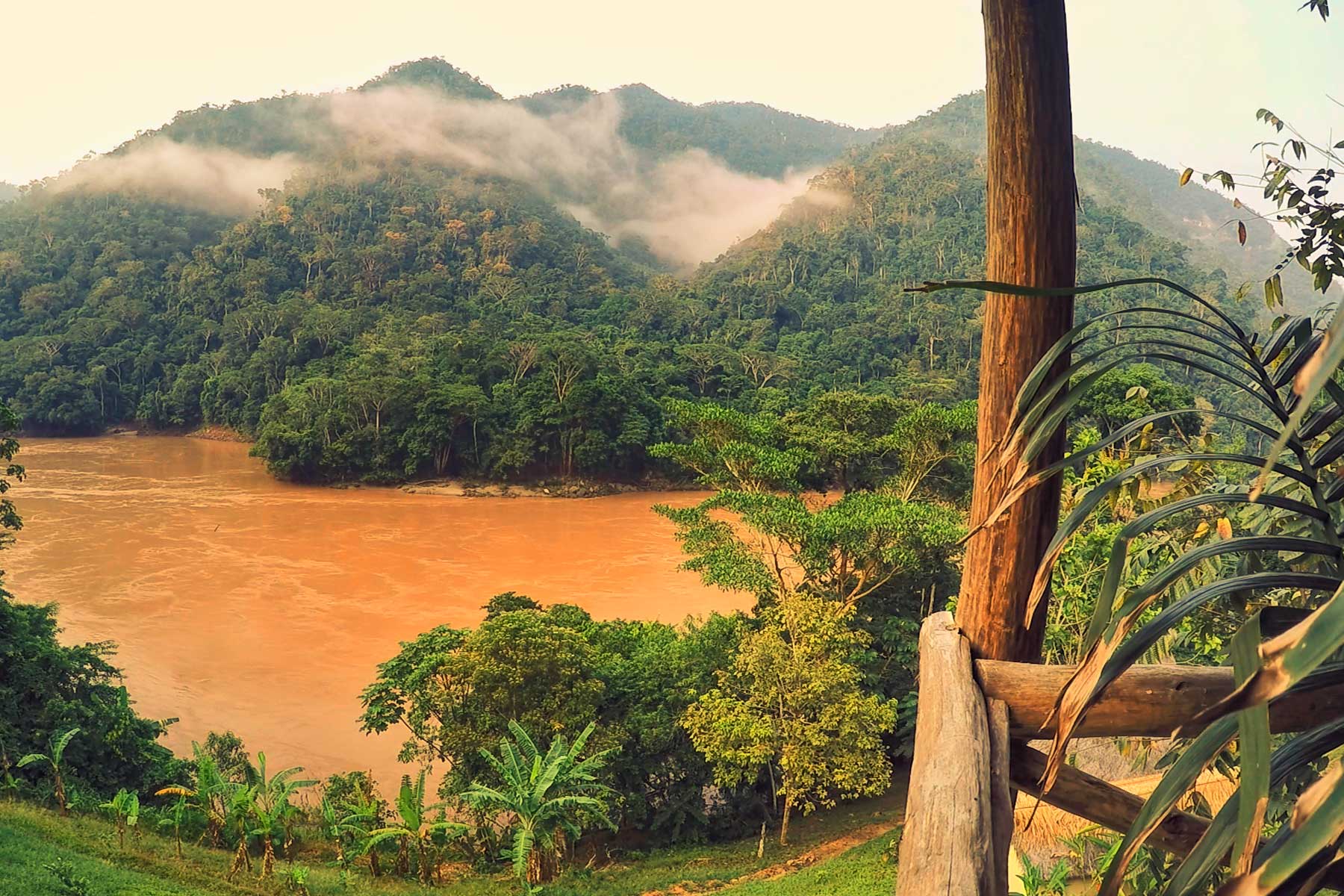 Moyobamba y Naranjos, the land of orchids and butterflys

A little less than two hours from Tarapoto is Moyobamba. It was one of the first cities founded by Spanish colonists in the amazon around 500 years ago. the city is home to 3500 species of orchids. If you make it at the end of October they celebrate and Orchid Festival for the turn of the seasons. We only stayed one day and one night, we decided to wait to see the sunset at the viewpoints along the river, about a half hour walk from town. The spectacle was incomparable

In Moyobamba we had a lunch of “Juane de arroz” which has an egg base, meat (pork / chicken) and rice, wrapped in bijao leaves and tied with banana rope (cacpa). And we accompanied him with viborachado: viper macerated in brandy. It looks a little strange at first but it was worth it  to try this exotic beverage.

We hurried north to get to Gocta, and Kuélap. In the middle we passed through Naranjos where we swam at the “beach of the butterflies”. There are thousands of these specimens (mostly orange) stationed at the edge of the river. It is a simply wonderful landscape. 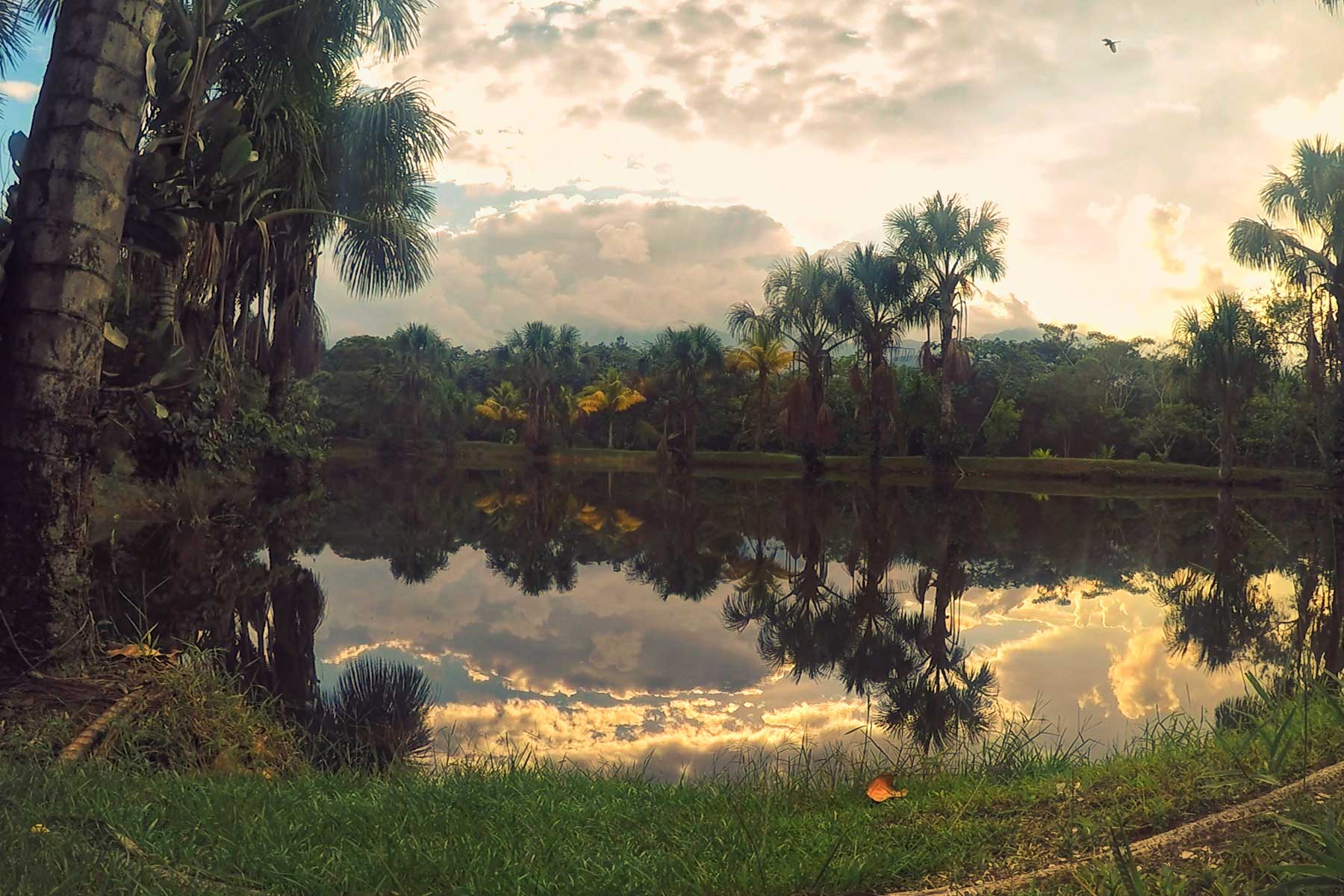 We came to the first major destination along the northern route. From Naranjos we went to Chachapoyas to rest and pass the night. The trip isn’t long just about 3 hours. Before we arrived we looked for waterfalls that are among the highest in the world. The temperature here was a little more temperate at the altitude of 2200 meters.

Gocta, or “la chorrera” as it is called by the locals, is in the province of Bongará, in the region of Amazonas. at 771 meters, this waterfall is among the highest in the world.

To get to Gocta we leave from Chachapoyas for the town of San Pablo. The journey from there to the waterfall is 6 kilometers. The road is a bit difficult because of the ups and downs but it is impressive. The landscapes are unique. They say that this is one of the most spectacular treks in the world and they are not wrong. The walk is along a well-defined path and among thick vegetation. Long before reaching the base of the waterfall we could hear the roar of water falling down the mountain. We spend the whole day soaking in the icy water and admiring the stunning natural wonder.

When we finished admiring Gocta we went back to Chachapoyas to discover the other magnificent tourist attraction of the north of Peru that we came for, Kuelap. 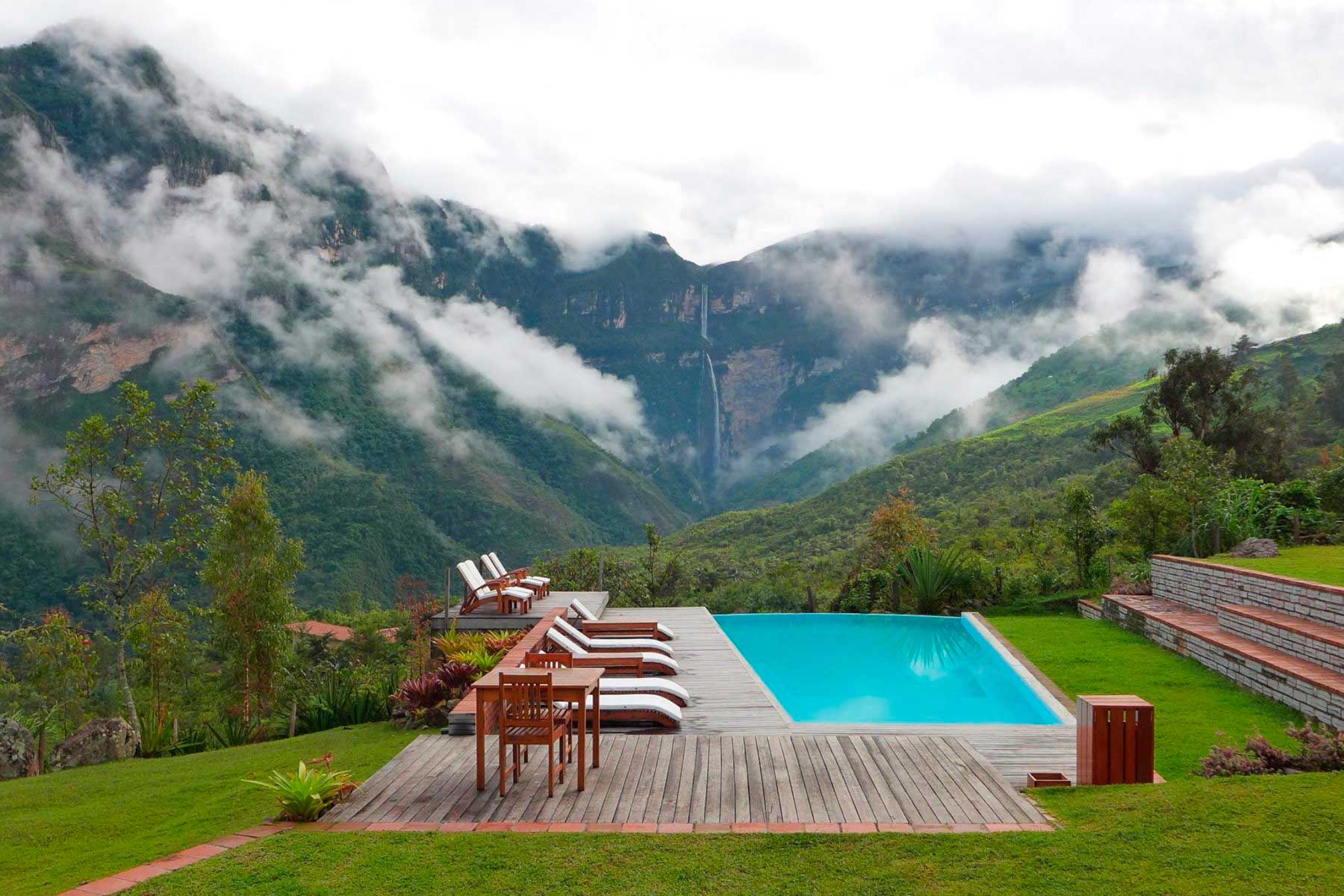 The city of Chachapoyas was had been doubly conquered, first by the Inca Empire and then by the Spanish colonizers. Despite this, there are still many traces of its previous history, of the Chachapoyas culture. One of the most important attractions is the fortification of Kuelap but there are also the Karajía sarcophagi, the Revash mausoleums and the Leymebamba museum.

Kuelap was another preincan city built around 1000 years ago. The incredible construction at this site has inspired an anthropological investigation of the culture. There is an impressive precision to the 600 meter long and 20 meter high complex that rests 3000 meters above sea level.

Kuelap is in the Uctubamba river  valley, 35 km from Chachapoyas. The fort is situated strategically, surrounded by cliffs and in a high area. The landscapes that can be observed are wonderful, a mixture of jungle and mountain.

Not far from Kuelap was an attraction that surprised us. The sarcophagi of Karajia, located in a ravine which can only be reached by climbing. Their height (2.50 meters) and the shape – which seems to contour the body, even in the way they were painted with facial features – are characteristics that make them unique. They are located in a ravine so inaccessible that they are perfectly preserved. We traveled almost 2 hours by car from Chachapoyas and then we walked another hour through the jungle until we saw the sarcophagi.

In the same region are the mausoleums of Revash. The small constructions in the ravine  functioned as funerary houses decorated with rock paintings in different shades of red. Their location – so inaccessible – keeps them protected from invaders, so they are remarkably intact. We arrived walking from the village of Hierba Buena. Although you can also go from San Bartolo, the first route is longer and a little more difficult, but the landscapes that you will move through are unforgettable.

Our trip through the attractions of the northern route is in the middle of its route. Our next destination is Huanchaco, home of the Moche Culture.

To get to Chiclayo cross first through Cajamarca, we did this fast as we were eager to get to Huanchaco. Another spot with plenty to do, its an important city to the north of the nation. Antique cultures and natural wonders abound. It lies 2750 meters above sea level nestled in the Andes.

We opted for one of thee main attractions: “Las Ventanillas de Otuzco”. It is a necropolis built on volcanic rock and with holes that resemble windows. Apparently they were designed 400 years before Christ.

From here we travel to Chiclayo. In this city we are at sea level and the temperature is very pleasant, almost 22º all year round. The city and its surroundings have dozens of natural and archaeological attractions. We are only 17 kilometers from the beach, for this reason we choose to taste here typical dishes such as ceviche or cabrito a la chiclayana con loche (a kind of common pre-Columbian squash from this region).

What can be done in Chiclayo? We visited the archaeological complex of Huaca Rajada, where we learned about the details of a typical Inca funeral. Here is the tomb of the Lord of Sipán. We also visited the ecological reserve of Chaparrí, which seeks to preserve the native flora and fauna such as the spectacled bear.

Walking around Chiclayo we notice its architecture, it is wonderful and ornate, especially its municipal palace and religious temples. A few kilometers from the city is the market of the Monsefú community. Here you can see the first traces of the Moche Culture. It is a market of creative crafts that still preserve traditions of this ancient culture.

And on the last stretch of our route through Gocta, Kuélap and the Moche Culture, we travel to Huanchaco, the region where one of Peru’s oldest cultures flourished the most. 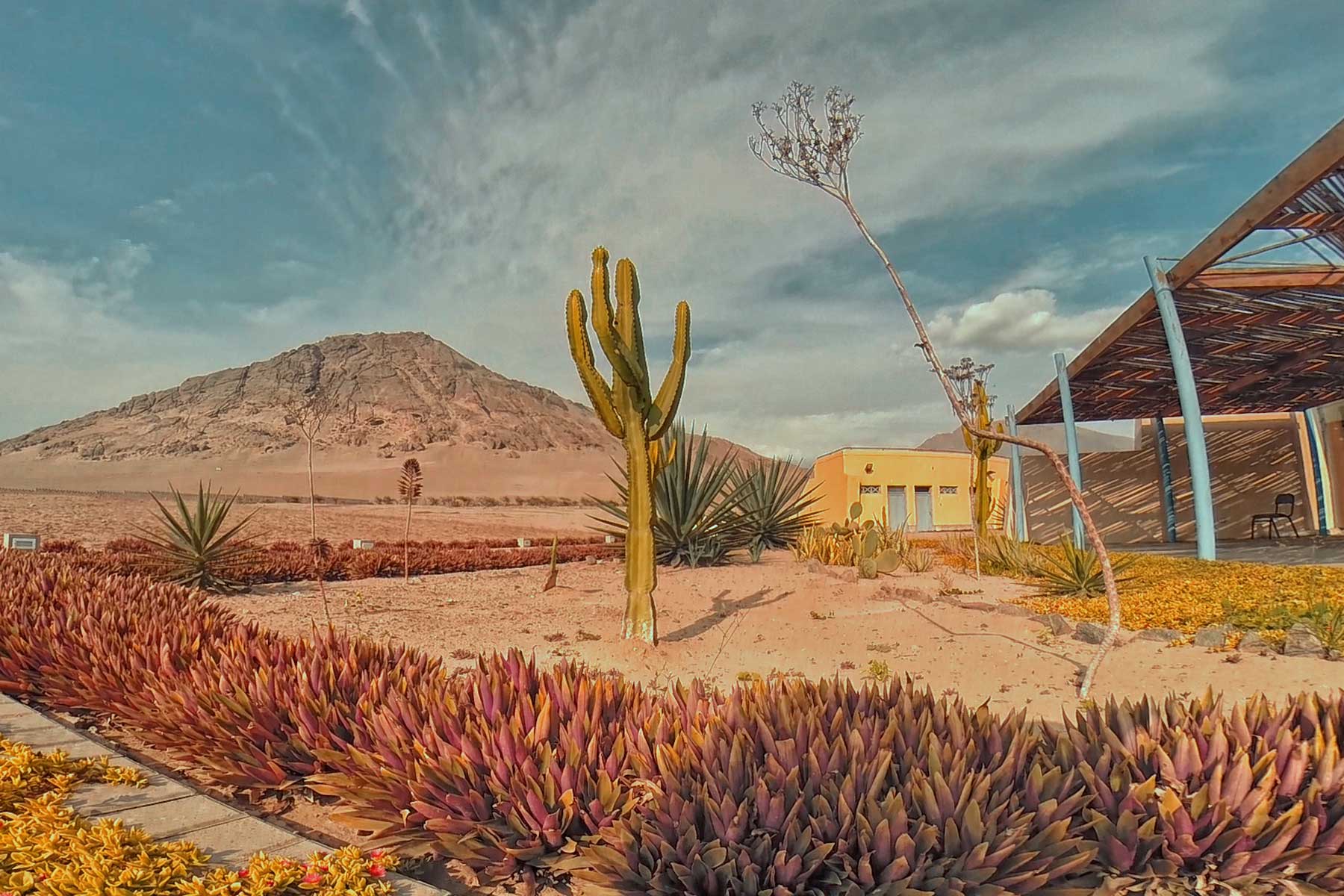 Our last destination before returning to Lima is Huanchaco. The small coastal town is a few kilometers from Trujillo, where we arrive first. It is in this city where you can appreciate the valuable heritage of the Mochicas: the caballitos de totora. They are ancient boats used by the Mochicas and the Chimúes to sail and fish in the sea. Still some fishermen are still using these little boats. From the coasts they look like riders of the sea.

The Mochicas were established between 100 and 400 years after Christ. They are famous for their pottery, considered the best in ancient Peru. Although their cities were sacked so many crafts and artifacts are scattered around the world. One of the most beautiful attractions that we visit from the Moche Culture is the Huaca del Sol and the Moon, a few kilometers from Trujillo. They are two colossal pyramids made in adobe. But the last great discovery of the Moche architecture, which struck us was El Brujo, with little-known characteristics. It is a construction 5000 years old all human occupation was recorded until the arrival of the Spaniards.

Huanchaco may be best known for surfing. It was the first city in South America (and fifth in the world) recognized as a World Surfing Reserve. Huanchaco is small but very chosen by travelers to spend a few days on the Peruvian coast. Its waters are warmer than that of Lima and its waves invite you to surf. 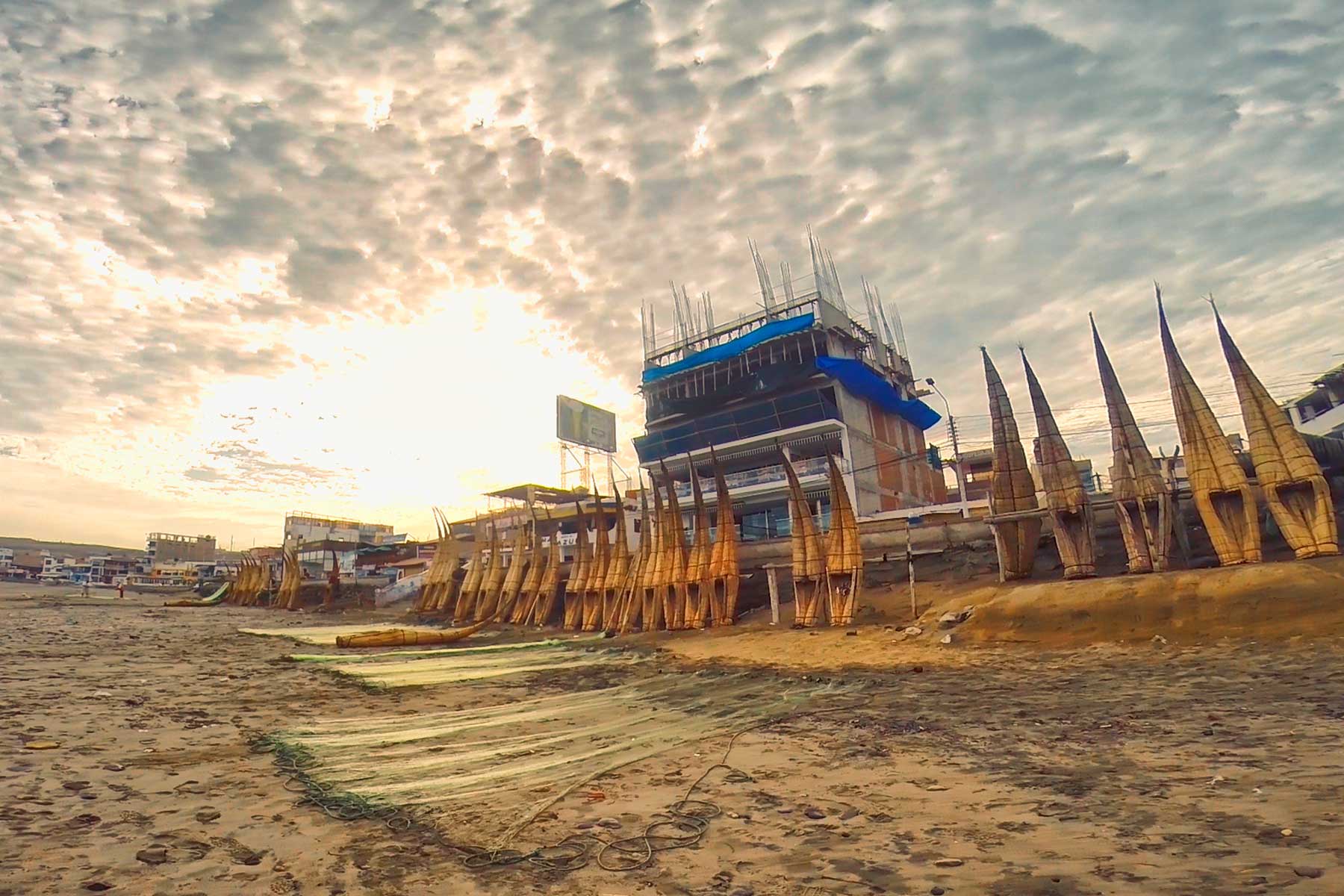 We returned to Lima but before we passed through Trujillo, also known as “the city of eternal spring.” We stayed only one day and what impressed us most is that its historic center is more than 135 hectares, which was once called Cercado de Trujillo. This first area of ​​the city was protected by large walls.

A final regional dish we sampled was the trujillana fish. Steam with a sauce of eggs and onions.

In the distance the sunset falls on the immense sea while surfers and totora horses glide over the waves like shadows. With this picturesque view we say goodbye to the most important attractions of the northern route: Gocta, Kuélap and the Moche Culture.

Reccomendations for traveling in the north of Peru

Our route crossed the jungle, the mountains and the coast, so in some areas we walk 2,000 meters above sea level (msnm). Although we did not suffer altitude sickness, we always had coca tea on hand and the popular “Sorojchi Pills” to avoid possible soroche. Our ascent was slow which allowed us to acclimatize.

In the jungle areas there is a lot of heat since the average annual temperature is 20 degrees and they are very humid regions. But when we crossed the mountain we passed a little cold. That’s why in our backpack we wear different clothes to adapt to changes in temperature and altitude. We always try to have sunscreen, sunglasses, cocoa butter (for dry lips) and a hat.

The mosquitoes were tireless traveling companions so the repellent was always at hand. As we love to trek and in all these regions we could enjoy dozens of trails, we use comfortable shoes. We also took care to never be without water. 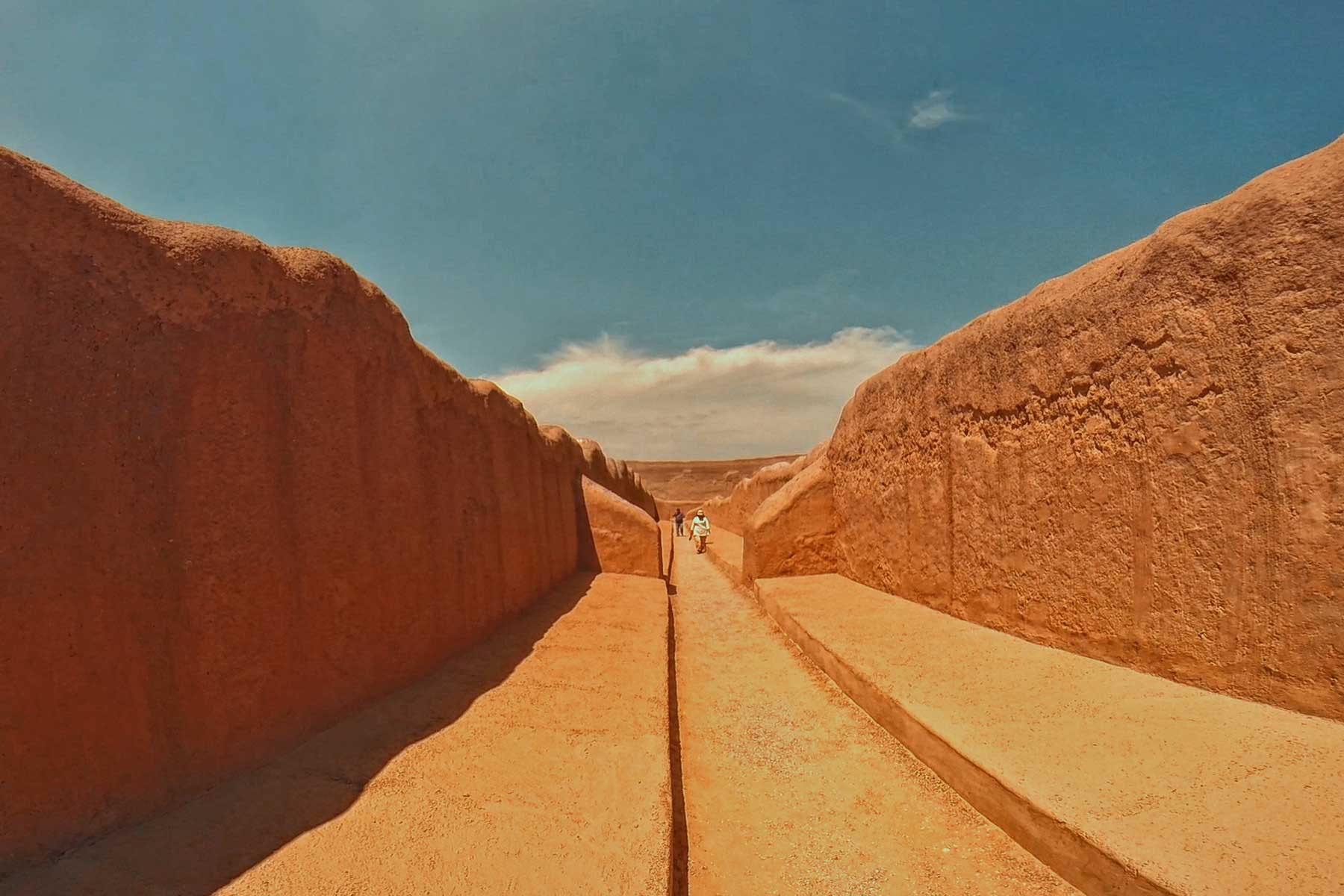